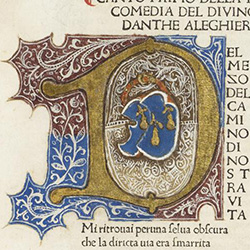 The John Rylands Research Institute and Library holds one of the finest collections of Dante Alighieri’s work in the world, containing fourteen of the fifteen incunable editions of the Divina Commedia, all but three of the sixteenth-century editions of his works, and a number of significant manuscripts.

Following a British Academy-funded project led by Dr. Guyda Armstrong, this collection presents findings of research into the reception of Dante’s work in the fifteenth- and sixteenth centuries through six key items. These digital surrogates allow twenty-first century readers to unlock the ways in which Dante was read and used through exploration of the mise en page, decoration, marginalia and other annotations.

Printed within four years of each other, and produced at a time when editorial conventions in the new medium of print were still extremely fluid, the three printed texts express very different approaches to and intentions for Dante’s poem in their format, layout, and accompanying material. The earliest, 1477 Venice edition (9383), was the first Dante edition to include a critical apparatus, including a commentary and life of the author. Produced between 1477 and 1478, the Milan edition (19561) contains a range of paratextual elements aimed at a courtly audience, with a more humanistic commentary. The 1481 Florence edition (17280), a landmark in early Italian printing, was the first to include a commentary written for the specific publication and to include illustrations. These three editions are in constant dialogue with each other; as competing scholarly editions of Dante, as localised expressions of Italian vernacular culture, and evidence for the linguistic debates which were emerging at the time.