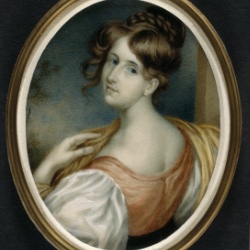 Elizabeth Gaskell was a novelist and short story writer, who lived in Manchester in the mid-19th century. Her first novel, Mary Barton, grounded in the grim realities of working-class life in Manchester, was published anonymously in 1848 and enjoyed immediate success. Its sympathetic portrayal of the extreme poverty and hardship that she had observed in her role as a minister’s wife prompted a lot of discussion. It also caught the attention of Charles Dickens, renowned novelist and author of A Christmas Carol, Great Expectations, Bleak House and many more, whose work often reflected similar themes, and from 1850 Gaskell regularly contributed to Charles Dickens’s weekly magazine, Household Words, where her novel North and South was first published in serial form. Later she turned to biography, and wrote the Life of Charlotte Brontë about her close friend after Bronte’s death in 1855. Her last work, Wives and Daughters, was almost completed, but left unfinished when Gaskell died in November 1865.