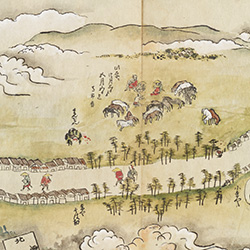 This collection draws on cartographic materials from the University of Manchester Library Japanese Collection and the Maps Collection. It holds roughly 60 items: mostly maps, charts and atlases, and a limited number of material classified as chishi, or topography (encyclopaedias, guidebooks, prints, surveys) that include maps or are otherwise related to cartography. The vast majority of items in the collection are printed, and they were produced in Japan during the Tokugawa or Edo period (1603-1868), with some exceptions, such as a Japanese tourist map of Japan published in 1897, and some maps of Japan published in Britain between the end of the eighteenth century and the end of the nineteenth century.

In the Tokugawa Period a proper cartographic culture, in the context of an increasingly mapped world, first took root in Japan. The ruling Tokugawa family and other local Japanese authorities ordered periodic land surveys in order to facilitate territorial control, which resulted in the production of administrative maps. At the same time, a growing publishing industry generated a wealth of commercial maps, some based on the official models, and others created specifically for distribution to the public. The resulting cartographical production included a variety of material: maps of sacred areas, road maps, city maps, provincial and regional maps, political maps of the whole country, and world maps.

The market for this sort of materials was wide. In the seventeenth century, the Tokugawa family established tight restrictions on movement, both within the country and across borders. While some of these restrictions were progressively eased, maps and other topographical materials were increasingly sought for, by consumers of all social standing, as means to virtually explore the country (and the surrounding world). They didn’t exclusively serve practical purposes, and they weren’t necessarily inspired by notions of “objective” or “scientific” representation. Many of them were at least partially (and in some cases highly) pictorial in nature. Distributed from the main publishing centres to peripheral areas, through a national trade network, they stimulated a new, widespread geographical conscience in Japan.

The Japanese Maps Collection of the John Rylands Research Institute and Library is a rich mirror to this mapped society. It provides examples of all of the above mentioned map categories, covers a wide range of geographical locations, and includes materials of great interest and, in some cases, of remarkable rarity.

Some of the maps were digitised in 2016 with a project led by Dr. Erica Baffelli (The University of Manchester) and funded by The Great Britain Sasakawa Foundation and The Japan Foundation. The rest of the relevant cartographic materials are being digitised and will be added in due course. All the items have been investigated, and all the item descriptions have been edited and expanded, as part of the Marie Sklodowska-Curie Actions Project Travel in Tokugawa Period Japan (1603-1868): Identity, Nation and Social Transformation led by Dr. Sonia Favi (2019-2021). The project, funded by the European Commission, uses the Japanese Collection to look into the social and cultural history of Tokugawa Japan (1603-1868), through the lens of travel history.

An online exhibition using this material is available via Manchester Digital Exhibitions: Travels in Tokugawa Japan (1603-1868): a Virtual Journey.