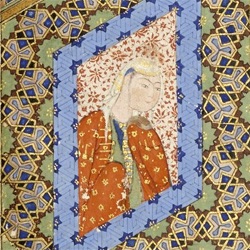 The Rylands holds an important collection of nearly one thousand Persian manuscripts, dating from between the early 13th century CE and the 20th. There are early copies of important literary and historical works alongside numerous calligraphic and lavishly illustrated volumes and decorated bindings. The collection contains manuscripts produced not only in Iran, but also in the broader Persianate world, including the Indian subcontinent, Central Asia and the Ottoman empire.

The vast subject range includes theological texts, prayer-books, commentaries on the Qur’ān, works on Sufism, and the lives of saints and prophets; volumes on the history of India, the Mughal Empire and Indian local history; literary prose and poetry, romances, chronicles and fables; works on law, philosophy, medicine, natural history, geography, cosmography, occult science, astronomy and astrology; writing manuals as well as books on grammar, dictionaries and encyclopaedias.

The John Rylands Research Institute and Library is in the process of digitising and cataloguing the Persian manuscripts, thanks to generous external funding. Here we present images and descriptions of over one hundred complete manuscripts, including some of the Library’s most important treasures. Some are luxury items made for a wealthy elite, valued for their illustrations and decoration. Others look less striking – undecorated and sometimes even scrappy – but preserve rare historical evidence, and occasionally unique texts. Together they reveal an enduring and widespread appreciation for Persian literature and cultural traditions.