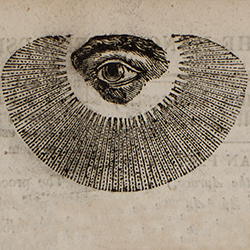 The Manchester Observer (1818-22) was England’s leading radical newspaper at the time of the ‘Peterloo’ meeting of August 1819, in which it played a central role. For a time it enjoyed the highest circulation of any provincial newspaper, holding a position comparable to that of the Chartist Northern Star twenty years later and pioneering dual publication in Manchester and London. Its columns provide insights into Manchester’s notoriously secretive local government and policing and into the labour and radical movements of its turbulent times. The Observer was founded by James Wroe, John Knight and John Saxton, a group of nonconformist radicals who called for reform of the Houses of Parliament. Their brand of radicalism was borne out of ideas underpinning the French Revolution and stimulated by long years of war and high taxation, rising bread prices, trade slumps and the all-around squalor of the industrialising cities. The language and style of the Observer served the growing numbers of literate working classes whose interest in politics was increasing. Newspapers in this period were often read aloud in workplaces and in public houses, thereby increasing circulation and reaching those unable to read.

The Observer was a fierce critic of the both the national Government and Manchester’s archaic and corrupt local power structures and its scurrilous attacks earned it repeated libel prosecutions. Despite the imprisonment of four of its main editors and proprietors the Observer battled on for five years in the turbulent years surrounding Peterloo before sinking in calmer water for lack of news. The appearance of the Manchester Guardian as a rival reforming paper probably contributed to its decline. As Robert Poole notes, the Guardian endured as the Observer's successor more by avoiding its disasters than by following its example.

For a detailed analysis off the Observer and its significance to the history of radicalism and journalism see Robert Poole, ‘The Manchester Observer: Biography of a Radical Newspaper’, Bulletin of the John Rylands Library, 95:1 (spring 2019), 30–122, which can be accessed here.