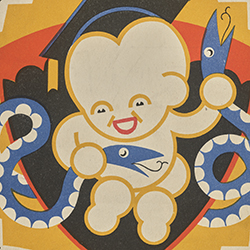 The Rag Rag was first published by the Students' Union in 1924, and lasted until 2003. It was released during Rag week and sold to members of the public to raise money which was donated to local medical charities. It contained jokes, cartoons and stories, and later editions included details of the Rag parade route. The Rag also raised money through ‘ragvertising’, printing large numbers of comedic advertisements, some of which were produced by Manchester students for local businesses. The early magazines were notable for their bright covers, adorned with an illustration which usually incorporated the snake and sun from the University's coat of arms. From the late 1940s the Rag became smaller in size, and jokes and cartoons came to predominate over humorous and satirical stories.

The Rag Rags’ attempts at humour often centred on negative or demeaning representations of those considered ‘other’ by the authors and artists as a result of their nationality, race, class, gender, sexuality or abilities. The context of this content is explored further in the ‘Our Rag Rags in Context’ blog post.

Content Warning
As a historical resource, this collection reflects the prejudices of the era in which it was created, and some items include language and imagery which is offensive, oppressive and may cause upset. The use of this language is not condoned by The University of Manchester, but we are committed to providing access to this material as evidence of the inequalities and attitudes of the time period.