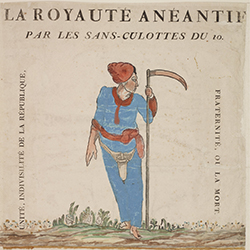 The French Revolution collection at the John Rylands Research Institute and Library contains an excellent range of printed material published in France between the start of the French Revolution of 1789 and the fall of the 1871 Paris Commune. There are particular strengths in newspapers and periodicals from the first revolutionary decade, and nineteenth-century histories and memoirs dealing with the various Revolutionary, Napoleonic and Restoration eras. Much of the collection was originally part of the enormous private library of the Earls of Crawford, the ‘Bibliotheca Lindesiana’. During the last quarter of the nineteenth century, the 26th Earl enthusiastically directed a series of large purchases at auction to build up the collection, which his son then transferred to the JRL during the first half of the twentieth century (in the form of a gift and a ‘semi-permanent’ loan). In the late 1980s, the loan collection, including most the French Revolutionary manuscripts, was withdrawn by the Crawford family and is now available for study at the National Library of Scotland, Edinburgh. However, all the other items (forming the majority of the original collection) are still at the library, and this collection remains a rich resource for the study of France and her revolutionary traditions.

This digital collection originated in a project funded by the John Rylands Research Institute and Library, directed by Professor Bertrand Taithe with research by Dr Alexander Fairfax-Cholmeley. You can find further results of the research project on the blog site Printed Revolutions: Writing, Printing and Reading Revolutions in France, 1789-1871.

This digital collection provides access to a small selection of vibrant source material covering six core themes from the French Revolutionary and Napoleonic experience. These themes are: