The Letters of John Ruskin 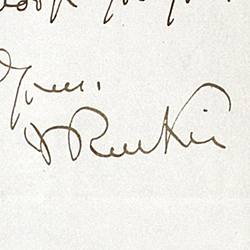 This collection is by no means all of the letters by Ruskin held at the John Rylands Library, and information on additional material can be found in the collection catalogue. The Ruskin manuscript collection consists of over 2,000 items relating to Ruskin, his work and his contemporaries, complementing the printed Ruskin Collection. The collection sheds light on Ruskin himself and his works, his personal affairs and his domestic and financial problems.

John Ruskin, nineteenth-century art and architecture critic and social critic, was ‘a gifted painter, a distinctive prose stylist, and a writer of polemical prose who seeks to cause widespread cultural and social change’ (Nicholas Shrimpton). He was the first to bring the assumptions of Romanticism to the practice of art criticism, and his notable works include ‘The Stones of Venice’, ‘The Seven Lamps of Architecture’, ‘Unto This Last’, ‘Praeterita’ and ‘Modern Painters’.