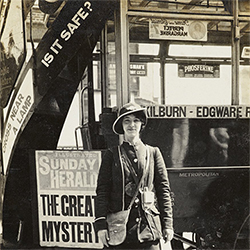 Arthur Reavil’s photographic album at the John Rylands Research Institute and Library provides a fascinating insight into the working lives of women during the First World War (1914-1919).

‘Women’s Work in Wartime’ contains 164 photographs that deliver a visual record of women working in a variety of jobs usually associated with men during this period. The photographs not only reveal the working lives of women during Wartime but they also offer a record of how women dressed for work depending on the nature of their employment. Reavil’s photographs capture women at their place of work in both rural and urban setting across the country.

A proportion of the album is dedicated to women working on the Railway as ticket collectors, porters, railway guards, signal lamp cleaners and Royal Mail workers. Other images depict women fulfilling roles such as window cleaners, painters, and mechanics and police women. The photographs provide a fascinating insight into the uniforms and clothes worn by women during this period. Put together with a variety of hats and gloves the uniforms illustrate a specific role and also act as a visual signifier of a new found empowerment in the roles that women were now fulfilling.

A selection of the images are from rural settings and interestingly portray The Women’s Land Army. Reavil’s camera captures women working on farms hay baling, feeding calves, milking, picking crops and working as foresters; using heavyweight equipment. They are photographed wearing ‘masculine’ attire; heavy boots and unflattering trousers covered by oversized aprons worn to fulfil the roles that men would usual do.

In more urban surroundings Reavil’s photographs depict women driving a variety of vehicles; mechanical and horse drawn. Some are repairing roads using oversized pick-axes, observed by curious onlookers. Other photographs show women with their hair tied in headscarves or hairnets to keep safe from dangerous looking machinery, protection similar to today’s wearing of Personal Protection Equipment. Munitions factory workers are pictured gauging fuses in neat rows while other women are photographed next to heavy machinery working as drilling operators and welders.

Many of these opportunities were closed to women after the war as servicemen returned to their jobs.