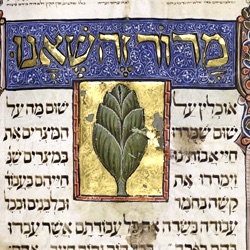 The University of Manchester Library holds over 400 Hebrew manuscripts dating from the 14th century to the early 20th century. They include deluxe decorated and illustrated religious and literary manuscripts such as the famous Rylands Haggadah, rare and unique items expressing marginal forms of Judaism, a collection of Ketubbot (marriage contracts), and amulets and other magical texts assembled by Moses Gaster. This diverse collection also has a wide geographical coverage, with manuscripts coming from the British Isles, Spain, France, Germany, Romania, Italy, Morocco, China and Yemen. Predominantly written in the Hebrew language in Hebrew script, other languages represented include Aramaic, Yiddish, Judeo-Arabic, Judeo-Spanish, German, Latin, English, Crimean Tatar and even Judeo-Persian.

The Library is in the process of digitising and cataloguing the Hebrew manuscripts, in collaboration with the John Rylands Research Institute and thanks to generous external funding. Here we present images and descriptions of over a hundred complete manuscripts, including some of the Library’s most important treasures. Some, like the Sephardi Rylands Haggadah (Hebrew MS 6), are expensive luxury items made for a wealthy elite, famous for their illustrations and decoration. Others look less striking – undecorated and sometimes even scrappy – but preserve unique versions of important texts or reveal the importance of the written word in everyday life.