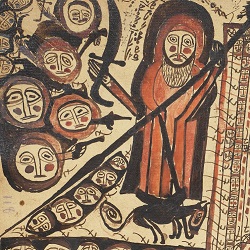 The Syriac manuscript collection in the John Rylands Library comprises some seventy manuscripts and manuscript fragments dating from the 6th century CE to the early 20th. Both sacred and secular texts are represented. The former include Old and New Testaments, Bible commentaries, lectionaries, psalters, collections of hymns, prayers, amulets or charms, and liturgical books. Amongst the secular works are grammars, dictionaries, writings on natural history, philosophy, astrology and the occult. 48 items are in West Syrian dialect, the remainder in East Syrian and Melkite; some include Karshuni (Arabic language in Syriac script). Some items are extremely important for their rarity or age.

Manuscripts numbered 1 to 6 derive from the Bibliotheca Lindesiana of the earls of Crawford, the manuscript portion of which Enriqueta Rylands purchased in 1901. The remainder came from the scholar-collectors James Rendel Harris (1852-1941) and Alphonse Mingana (1878-1937). The latter was employed as a cataloguer at the John Rylands Library from 1915 onwards, later transferring his services (and at least ten manuscripts illicitly) to Selly Oak College in Birmingham.